You are currently here! Education Top Commodities to Invest in During Crisis 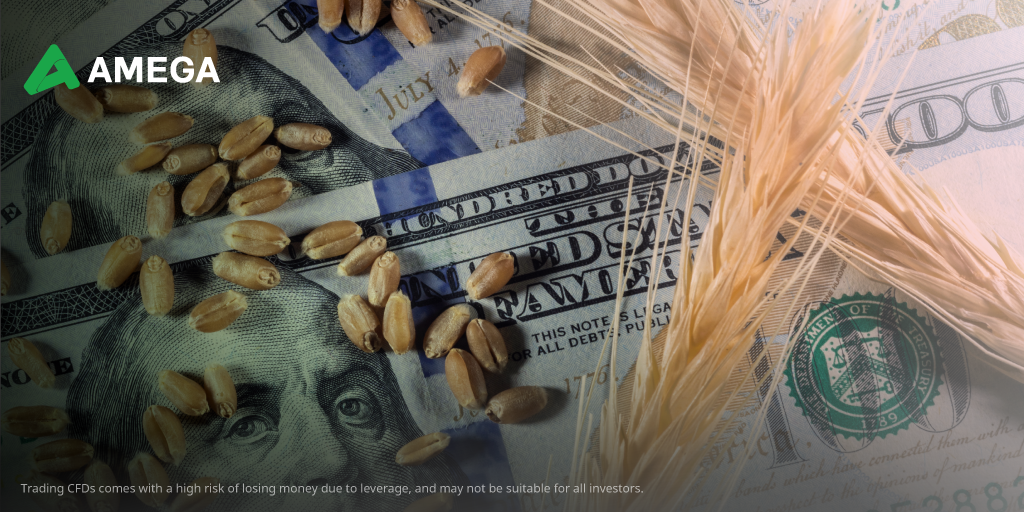 Top Commodities to Invest in During Crisis

Since the war began there has been a bit of turmoil within the commodities world. Rising inflation and a strengthening dollar have fed hope within investors that many commodities’ prices will remain high.

In this article, we’ll quickly break down the commodities impacted by the current state of affairs and why – if so– they make a good investment in the near term.

Commodities are typically considered to be any good or product that is bought and sold on a market and is differentiated from things like services or abstract entities; a raw material that can be bought and sold at different prices. They are classified to be goods that one can easily store, transport, and insure.

Natural resources and agriculture commodities refer to raw materials that branch into the consumer market and food markets because they are used as input to production. Security commodities, like oil or gold, often have a future date set on them in which they will arrive as futures do on stocks — an individual can invest in a commodity and wait for it to arrive.

The prices of different commodities are dependent upon several factors:

Generally speaking, commodities prices are usually linked to the cost of production. For example, in recent years, commodity prices have risen because of a few factors including political instability and a looming economic crisis that disrupts production.

Which commodities are affected by crises?

Some stand-out commodities that are more likely to endure and potentially flourish when there’s a crisis are precious metals, agricultural goods (such as coffee and sugar), and grains (such as wheat).

If history is something to go by, during the 2008 financial crisis people started seeking out inflation-adjusted investments like commodities to protect themselves from the downturns in the market.

An older example in the history of commodity trading is the Arab Oil Embargo of 1973. Although it was about oil, the crisis impacted all commodities. Food and energy prices were affected the most. The price of oil had increased by over 400% in the months following the embargo. Food prices had also increased due to decreased supply. In the US, they were up by as much as 10%.

In general, all commodities are impacted by a crisis to some degree, due to how globalized the world economy is. But some are impacted more than others.

Why are commodities popular right now?

The most popular types of commodities right now are oil and gas, agricultural foods, and metals. They are becoming even more popular because people are afraid they may become scarce due to the war in Ukraine.

The war has put Russia in direct conflict with the U.S. and other countries. Economic sanctions on Russia, which is a major energy producer that relies on oil and gas for 80% of its revenue, have cut energies off from European and other markets. This has caused an increase in prices everywhere because so many countries rely on exports from Russia and Ukraine.

Ukraine and Russia together account for 29% of the world’s wheat trade and Ukraine alone 20% of the world’s corn and is the biggest China exporter. Consumers have good reason to be concerned as supply disruptions have been an issue during the pandemic. The current supply issues exaggerate the phenomenon as Ukraine’s land is a very fertile one.

The price of some different types of metal, including steel and iron, has dramatically increased due to the recent war in Ukraine. Ukraine ranks 8th in iron and steel production globally. The shortage of metals that are needed in the military and carmaker industry to produce weapons and cars, such as nickel, also skyrocketed. Palladium and platinum are also impacted, as Russia accounts for 37% and 9% of the world’s production.

On the other hand, other metals such as gold and silver are considered popular commodities as people turn to safe havens during crises.

Is investing in popular commodities now a good idea?

Investing in commodities can be complicated because there are so many different choices and factors to consider. There are also special considerations you need to take into account depending on what commodity you’re interested in.

For example, raw metals usually carry a speculative component that is reflected in the price and it takes more research to get good value.

On a different note, if a commodity’s price has already risen, then the investment will translate into a greater risk than reward. So, how does one go about investing in the right commodities?

How to choose the right commodity to invest in?

Choosing the right commodities to invest in can be tricky because their prices often fluctuate and there is no way to know when a crisis will get better or worse.

Overall, to decide which commodities are better than others to invest in, investors will have to look at the quality of the goods being produced as well as the current and future demand for the goods. A commodity that is used more for its supplied quality is a better choice than one that is used because it’s in high demand.

Some of the most important things to consider are:

Oil is the most popular commodity for this reason amongst others because it generally produces steady returns without taking any effort on the behalf of the investor. Both natural gas and metals have an exponential growth rate along with oil, which makes these commodities extra attractive to investors.

Agricultural commodities can fluctuate according to the weather and industrial output tends to rise and fall with global economies and consumer behaviors. Energy can also fluctuate depending on factors like demand and government policies.

From a technical standpoint, one of the best determinations of a commodity’s downside is its historical volatility and how much it moves year over year. If you invest in a commodity that has a historical uncertainty to its downside risk, there is more potential for powerful positives than if it has a history of underperforming.

Which commodities have already spiked and why?

The war in Ukraine has already disrupted the supply chains several countries rely on for their production. Prices of several commodities have reached unprecedented levels and returned to their base, if not corrected at least, as the initial concerns have waned off – (since the war % | now %):

Nord Stream 2 is a pipeline project that would bring gas into Germany from Russia for the next 30 years. Russia is one of the biggest natural gas producers in the world and the biggest importer in Europe. The building of this pipeline would be beneficial to other countries because it would give them more access to natural gas and make it more affordable. Without it, the EU has to source LNG from the US and as a result, gas prices keep increasing as along with rising cost to transfer supply is scarce without Russia.

The Russian military invasion of Ukraine and ongoing fighting have disrupted crop yields. Fertilizer prices are up sharply in Ukraine over the past few weeks as well. Supplies of wheat are tight but India and Australia are filling the void. The question is whether the war will end soon, because this is the usual period to plant wheat.

With the rising tensions in Ukraine and constant threats to the region’s stability, there is a significant risk that sanctions will worsen any supply disruptions. Despite this high chance of instability, the consensus among experts is that oil prices could still move down if sanctions are lifted. However, if they are not lifted, current downward crude oil expectations should be revised upward.

Palladium and platinum are traditionally used in the automotive industry, so when supplies start to run low, prices tend to rise significantly. Since Russia is one of the most important producers of rare-earth metals, along with China, prices of palladium and platinum increased significantly. However, it was possibly due to the rise of tensions as investors were frightened that there may be a shortage in these metals due to sanctions or depleted mines. At least this is what their performance suggests.

Which commodities to invest in right now then?

A lot of people are worried about investing in commodities lately because the US dollar has been strengthening and as showcased above not all are poised to rip rewards.

Technically speaking it seems that the spike is done as the war is at least not getting worse. Natural gas is the only commodity maintaining a good grip on its gains as it is still up 40% since the invasion. This makes it a bad opportunity as it’s at the top! Wheat has gone from 60% plus to only +20%, and corn has barely printed any upside. On the other hand, oil has lost nearly all of its gains despite sanctions, making the whole price action questionable. Is crude oil so speculative? It seems so. Finally, when taking into account that both palladium and platinum are in loss, one wonders what is the best way to approach this market?

What is the best way to invest in commodities right now?

When there is a financial crisis, commodities investing can offer interesting opportunities. Commodities are very efficient at minimizing risk and doing it through avenues that are often overlooked.

For traders, taking advantage of the commodity market opportunities that arise during periods of crisis can be a quick way to rip some rewards. It could pay to look for the best investment and trade opportunities. But when the short-term opportunity seems to die out, the long-term one comes into the game.

In an increasingly globalized and connected world, it’s important to diversify investments across various asset classes. Investing in commodities long-term could provide a source of income amidst geopolitical uncertainty. Commodities also tend to remain stable in the event of economic or financial crises.

How to invest in commodities?

A dollar-cost average (DCA) strategy will help reduce the emotional stress created by fluctuations in commodity prices. It is a conservative investment strategy that doesn’t require any technical knowledge. The process involves buying or selling a particular CFD over some time. This will ensure that the investor takes advantage of price increases while also limiting losses if prices fall.

This strategy takes advantage of the trader’s patience and is based on the theory that markets go up and down, not just up. So, when prices are low, you buy more, and when prices are high you buy less. Take for example the prices of platinum; you would buy more as it’s already -12% compared to the invasion date. With this strategy, you can have more peace of mind knowing that lower purchases won’t be wasted if prices drop in a recession or even an economic downturn.

Why is DCA a good option?

Dollar-cost averaging is a strategy that spreads an investment out over time. By doing this, you are less reactive to short-term changes and the fluctuations will even out in the long run. It is also more psychologically effective, as it creates an idea of predictability so people know what to expect.

What is the downside?

In general, investing in commodities will shelter your portfolio during economic turmoil. It is becoming more common as the global economy shifts and it offers investors the opportunity to profit from short-term fluctuations as well as longer-term trends. However, it is short-term fluctuations that include a significant level of risk. If you have difficulty predicting their value, the downside risk is greater for you and you should seek a more stable and logical play.